The most coveted option, sport seats were manufactured by Recaro and introduced in 1967. There are 4 types of sport seats. 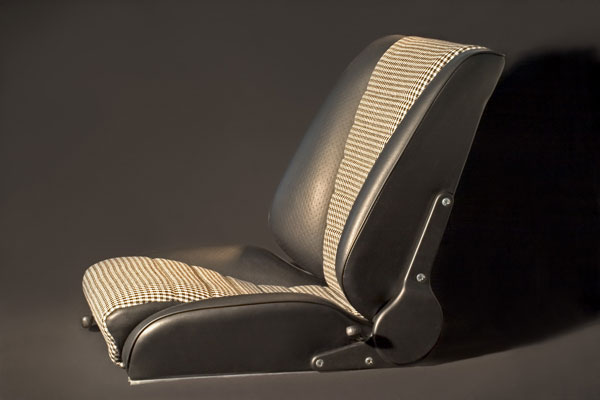 The 1967 MODEL had no headrest provision, an attachable headrest was available as an option. 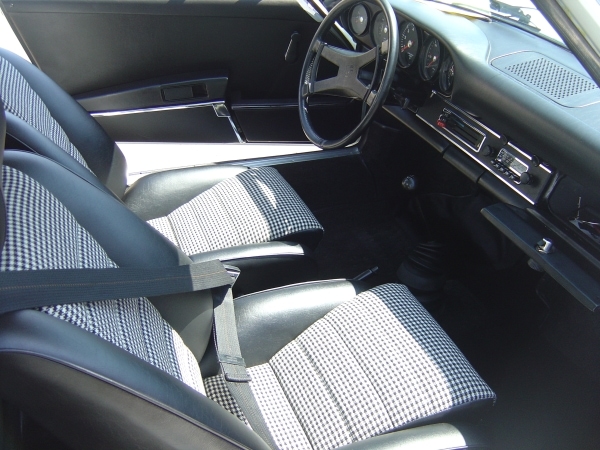 This gorgeous 1973 Sport seat done in green with houndstooth (pepita) inserts is another of Eric Linden's restored by Tony Garcia of Autobahn Interiors (AutobahnInteriors.com).

1973 changed the locker system from single locker to double locker for improved safety.

The 1973 911 window sticker shows that sport seats were a mere $99.00 option. Inexpensive as that seems today, few 911s were ordered with sport seats making them rare and very valuable.

Reproduction sport seats are available from several manufacturers and are a reasonably priced alternative to originals.

1965-1968 Tool Kit
The tool bag had a smooth black vinyl exterior with a light tan, dark tan, light gray, or a very striking blood red interior. Some early cars received a tool kit bag with a black vinyl exterior with a linen-like texture, but most of those seem to have found their way to 912's. The very first (and very few) bags had two small rivets attaching the spring actuated clasps, followed by a somewhat flat clip with bent prongs, and finally a taller clip with bent prongs.

The tools included:
Some include the small bottle of glycerin in the tool kit, but that was originally and correctly located in the glove box not the tool kit. Although shop towels had not been included in tool kits in many years, they could be purchased separately at the dealer.
1969-1973 Tool Kit
The 1969 911 tool kit was, for the most part, very similar to the previous 911 kits. The differences included a tool kit bag that had a black vinyl exterior with an elephant skin texture.The 1970 to mid 1973 911 tool kit was exactly like the preceeding 911 kits with the exception of a black vinyl tool kit bag with a basketweave texture.

The tools included (changes from the earlier 65-68 kit shown bold):
A Messko air pressure gauge was no longer included although one could be purchased separately at the dealer. There were a few early version "10000 VOLT" screwdrivers that had a very dark red plastic handle and slightly enlarged round knobbed ends that found their way into 1969 kits and possibly some later 911 kits. These are somewhat rare. The standard "10000 VOLT" screwdrivers had a red plastic handle.
Midyear 1973 Tool Kit
The mid '73 911 factory tool kit was offered for only about 6 months. It had a tool kit bag that had no inner liner, an interior upper flap, and was held together with a tie string rather than spring-actuated clasps. The screwdriver was now a single handled version with a reversible slot and philips shaft. The five open-end wrenches now stated "SELECTED SPECIAL STEEL". The spark plug wrench was modified. The rest of the tools remained the same.

The tools included (changes from the earlier 69-73 kit shown bold):
Although shop towels and the Messko air pressure gauge had not been included in tool kits in many years, they could be purchased separately at the dealer
Privacy Policy Terms and Conditions
Powered by SpeedDigital